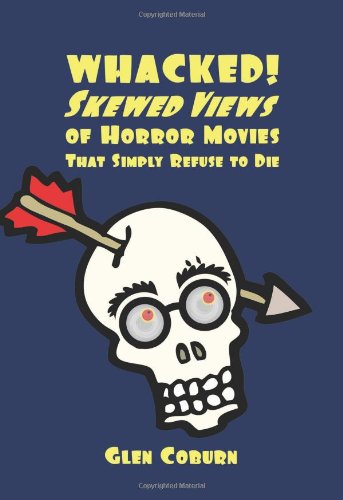 Whacked! is the definitive book of insane commentaries that focus on movies of the horror and exploitation genre of the 1970s and ‘80s. The satiric criticism of movies featured in this book is the meat. The movies themselves serve as a backdrop. Home Video pioneer, Glen Coburn, writer/director of Bloodsuckers From Outer Space creates a quirky cast of characters that meander through his commentaries. These characters and their presence as the author’s movie viewing companions are often more significant that the movies themselves. A central figure in the book is Coburn’s unofficial bastard stepson, Elmo. This scruffy, unwashed young man is responsible for perpetual hijinks that often distract the author from his mission to strip down each movie to its despicable anatomy. From the author: “After years of suffering from over active sweat glands I finally realized the truth. The vaporous fumes of this book do not serve as movie reviews. My commentaries are not a sewer pipe to the understanding of movies such as, “Cannibal Buttwipes of Alabama.” My flatulent essays are the entertainment itself. It was brought to my attention by a lobotomized turnip farmer that when he read these articles he was overcome with a compulsion to witness the movies. My beautiful writing led to great inspiration in the simmering brain of this pathetic specimen of humanity. I was not alone during my adventure in self-loathing. Several people and animals were always around to stink up the place. My horrible bastard surrogate son, Elmo was at arms length most of the time. His chronic presence was disturbing and comforting in equal measure. My lovely wife, Honeypot watched some of these movies while reading a cookbook written in Braille. My darling smart-ass daughter, Princess sat in on a few viewings and quickly turned even more disgruntled. A friend of mine described this book as toilet reading. He said that each of these commentaries could be read in one sitting. If you enjoy this book, I will fawn over you until you become nauseated. Those who do not appreciate my work can go straight to hell.” An excerpt: “This movie reminds me of being doped-up on cold medication. It's like waking up in a night sweat from the grip of an awful dream only to realize that you're still dreaming. When you finally wake up again, you figure out that you're in another dream. This goes on until ninety minutes have passed and you become fully alert, engulfed in a pond of your own saliva. If Christopher Nolan was drunk on window cleaner and made Inception for ten dollars, the result would be Blood of Ghastly Horror. I don't mean that in a bad way. This movie is a veritable masterpiece of making one movie out of another movie and then making another movie out of the first two. Each additional film contains new footage that is unrelated to anything in any movie ever made. The layers are intractably woven together into an irresistibly trippy gruel.” Review: "Not since that other Texas redneck has there been a critic whose collection contains such a colorful cast of characters and a trashy attitude toward the trashy films we (for no good reason) love. WHACKED is not only a nauseatingly fun read, but between all the shinola and bullstuff, I bet you'll learn a thing or two. It’s a perfectly putrid addition to your vast library of otherwise stuffy film books that take themselves way too seriously." — Michael Koopmans FANGORIA.com

Paul Blaisdell, Monster Maker A Biography of the B Movie Makeup and Special Effects Artist

I Do and I Don#x27;t A History of Marriage in the Movies

The Mammoth Book of Slasher Movies